Ask us about our products and manufacturers.

The Marsh Funnel is a simple device for indicating viscosity on a routine basis. When used with a measuring cup the funnel gives an empirical value for the consistency of a fluid. The number obtained depends partly on the effective viscosity at the rate of shear prevailing in the orifice, and partly on the rate of gelation. The Marsh Funnel Viscometer Model 201 and Measuring Cup Model 202 are made of rugged, break-resistant plastic that resists temperature change deformation. The Measuring Cup, graduated in cubic centimeters and fluid ounces, is designed specifically for use with the Marsh Funnel. This easy to operate equipment is used for making rapid, on the spot measurements of fluids viscosity. The Marsh Funnel readings are only general measurements, but the frequent reporting of the Marsh Funnel Viscosity will indicate changes in the fluid viscosity that could require corrective action. Funnel Viscosity is the ratio of the speed of the sample fluid as it passes through the outlet tube (the Shear Rate) to the amount of force (the weight of the fluid) that is causing the fluid to flow (the Shear Stress). Marsh Funnel Viscosity is reported as the number of seconds required for one quart of sample fluid to flow out of a full Marsh Funnel. In addition to the Marsh Funnel, the viscosity measurement procedure requires a graduated container (Measuring Cup) to receive the fluid as it flows out of the funnel, a means to measure elapsed time (Stopwatch), and a thermometer for measuring the temperature of the sample. 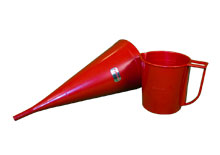